You are here: Home » BACCJACK

Players make an initial ante bet and may also make an optional bet on “bad beat” and an optional side bet “NINE”. Each “bad beat” can’t be more than ten times the ante bet. Each player is dealt two cards face up, and the dealer is dealt one face up card and one face down card.

If the dealer’s up-card is a 9, players are offered the chance to make an optional “insurance” bet before any further cards are exposed. The dealer then checks whether the down card is a 0-value card. If it is, all insurance bets are paid off at 2:1 odds, all ante bets are lost, and “bad beat” bets are settled as follow: A player hand with a value of 9 is paid at 3 to 1 odds, otherwise the bad beat wager loses. If it is not, then the play continues. 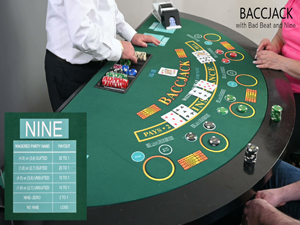 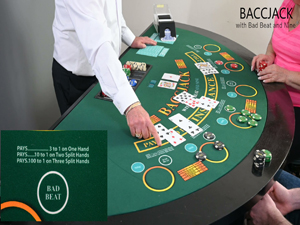 Additionally, players whose initial two cards had the same value may choose to split the cards and put out an additional ante bet, receiving one more face up card on each of the two split cards. If after splitting an additional pair is obtained, they may split one more time (but if two additional pairs are obtained they may only split one of them, the maximum splitting allowed is to a total of three hands). Each of the resulting 2-card hands may then be played as usual, standing pat, doubling and taking a 3rd card, or redoubling and taking a 4th card.

Bad beat side bets are settled according to the following rules:

After all bets are resolved, the dealer collects all cards, new wagers are placed and a new round begins.

ADVANTAGES OF BACCJACK ON BACCARAT AND BLACKJACK

1. NOT LIKE IN BACCARAT, PLAYERS INVOLVEMENT AND INTERACTION IN BACCJACK ARE ESSENTIAL AND SIGNIFICANT.

2. NOT LIKE IN BACCARAT OR BLACKJACK, THE AVERAGE ANTE BET IN BACCJACK IS TWICE AS MUCH, ABOUT 2.1 UNITS.
MOREOVER, THE INSURANCE AND BAD BEAT WAGERS, LIMITTED TO 10 TIMES THE ANTE WAGER, BOOST THE TOTAL AVERAGE WAGER TO A MUCH HIGHER VALUE, (UP TO 22 UNITS). PLAYERS EITHER WIN OR LOOSE, NO PUSH. PAYOUTS ARE 1 TO 2 OR HIGHER AND UP TO 100 TO 1.

3. WITH THE INSURANCE AND BAD BEAT WAGERS, PLAYERS ARE ALWAYS IN THE GAME AND ALWAYS HAVE STILL A CHANCE TO WIN.

4. NOT LIKE IN BACCARAT, THE OPTIONS AVAILABLE TO THE PLAYER IN BACCJACK ARE MANY, SUCH AS TAKING ADDITIONAL CARDS, ARE SIMPLE AND BEING DECIDED BY THE PLAYER ONLY.
NOT LIKE IN BLACKJACK, DEVIATION OF THE PLAYERS FROM THE OPTIMAL STRATEGY HAS A VERY SMALL EFFECT ON THE CASINO ADVANTAGE (IN BJ CA CAN JUMP FROM 0.6% TO TENS OF PERCENT, WHILE IN BACCJACK IT CAN GO FROM 1.1% TO 3.3%).

5. NOT LIKE IN BLACKJACK, PLAYERS DON’T GET UPSET AT THE DEALER OR MAD AT OTHER PLAYERS BECAUSE OF A “BAD” OR “UNEXPECTED” MOVE OF THE OTHER PLAYERS THAT WOULD AFFECT THE DEALER SCORE. BACCJACK IS INTIMIDATION FREE.

6. NOT LIKE IN BLACKJACK, THE VALUE TO THE PLAYER OF CARD COUNTING IN BACCJACK IS INSIGNIFICANT AND MUCH LESS THAN IN BJ. MOREOVER, SINCE CARD COUNTING IS NOT AS MUCH AS EFFECTIVE, INSURANCE AND BAD BEAT WAGERS COULD BE LIMITED TO UP 10 TIMES THE ANTE WAGER. 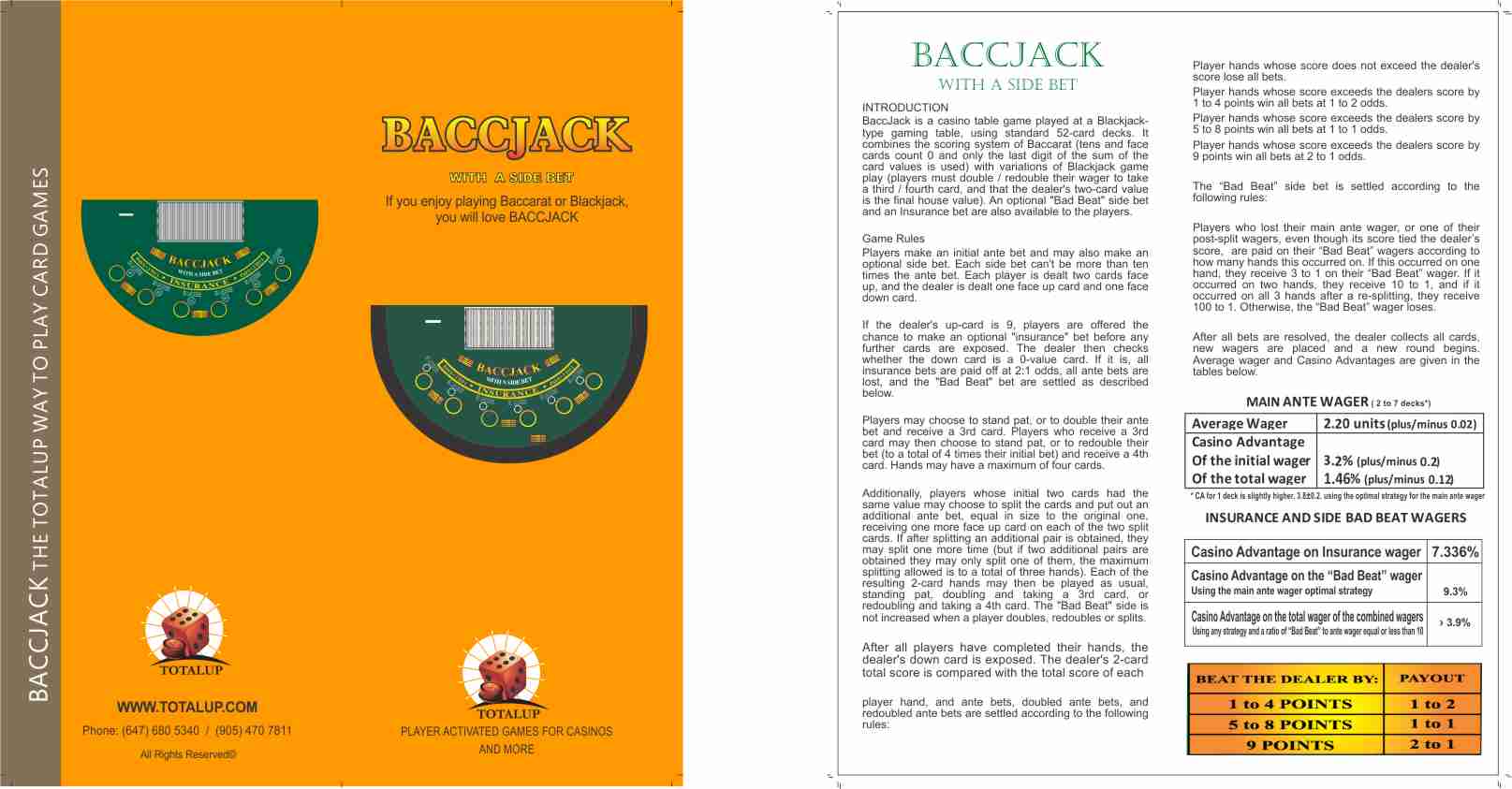